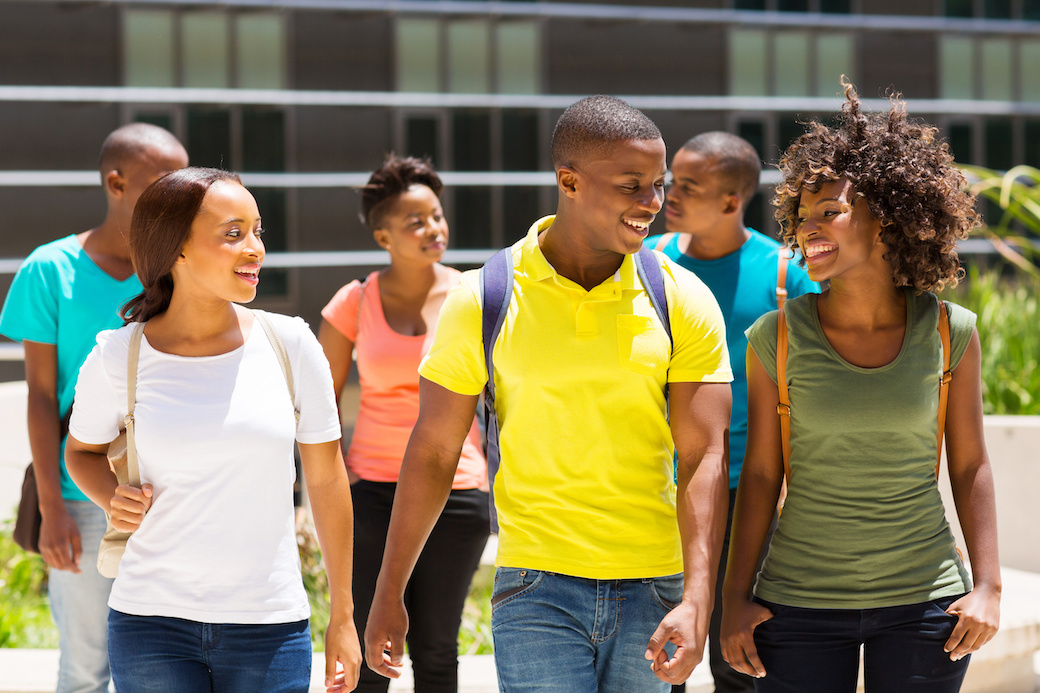 This month’s roundup looks at the far-reaching effects one Supreme Court ruling could have on students at HBCUs, how big stars are boosting schools’ credit ratings, and the impact a widespread appeal of Black art is having on galleries at HBCUs across the country.

It’s an equation that has become far too common for educators these last two years: returning to school during a pandemic. Leaders of HBCUs welcomed new and returning students amidst the usual challenges and also while managing an uptick in COVID-19 cases. However, some experts are saying HBCUs seem to be mitigating COVID-19 on their campuses better than their non-HBCU counterparts.

Sadly, HBCUs are also handling more bomb threats than their non-HBCU counterparts. More than a third of the nation’s HBCUs received bomb threats in 2022 and many leaders say they are frustrated by the lack of communition and support from federal agencies.

Though no bombs were ultimately found, repeated false alarms, police sweeps, campus lockdowns and evacuations disrupted classes and took a toll on the mental health of HBCU students and parents.

“You don’t get that time back,” Dwaun Warmack, president of Claflin University in South Carolina, said of the time and effort spent responding to threats. Meanwhile, “no one is brought to justice, and then you have to go back to business as usual.”

The FBI says it has 34 field offices working the case, but as POLITICO reports, some HBCU leaders say it doesn’t feel that way.

Eight HBCUs received bomb threats on Jan. 4, each from callers who used racial slurs. On Jan. 31, at least seven schools received similar calls. And on Feb. 1, the start of Black history month, 18 schools were called with campus bomb threats — and more threats followed throughout the month.

Both the bomb threats and challenges of leading a higher education institution during a pandemic were topics of discussion during the inaugural HBCU Dinner hosted by the RW Jones Agency last month in Washington, D.C. Seven HBCU presidents enjoyed leading a vivid discussion on higher education, HBCU stereotypes, funding and answered a wide variety of questions from national media.

The question of whether HBCUs should still exist was also brought up. Benedict College President Roslyn Clark Artis shared while it might be an issue for some, it’s not even something HBCU leaders are thinking about right now. Artis emphasized that while a conversation on overturning affirmative action policies could potentially impact HBCUs, it shouldn’t because such colleges and universities do not practice discriminatory measures.

“We have never excluded anyone. Where did the Jewish refugee scholars find a home? HBCUs,” Artis said. “We never turned away anyone at HBCUs though, born of discrimination, we have never discriminated.”

Another group of college leaders gathered down the street at the White House in August to discuss the U.S. Supreme Court’s decision to overturn the constitutional right to an abortion.

Several leaders of HBCUs attended the meeting, including Dr. Wayne Frederick, president of Howard University. The leaders reportedly told Vice President Kamala Harris about concerns affecting students and their campuses’ operations. Leaders also flagged an increased burden on those who have been sexually assaulted and concerns about how their own medical schools and hospitals will adapt.

“Our measured, strategic growth at virtually every level is in perfect alignment with the NC A&T strategic plan, which calls for an enrollment of 14,000 by Fall 2023,” Chancellor Harold L. Martin Sr. said in a statement. “And we are building, developing and maturing to ensure that we provide the same great Aggie Experience for all our students, faculty, alumni and other constituents.

The Board of Trustees at Fisk University is working hard to ensure students don’t feel a negative difference after presidential personnel changes at the start of the school year. The Associated Press reported Dr. Vann R. Newkirk immediately stepped down after less than two years on the job.

“The Board of Trustees is charged with ensuring that Fisk University continue to excel as a leading academic institution and that our future is defined by a shared vision and set of values,” the chair of the board, Frank L. Sims, said in a statement. “The board unanimously agreed that the next chapter in the Fisk future calls for new leadership.”

Sims will serve as acting president while a committee conducts a search for a permanent replacement. No reason was given for Kirk’s departure.

Have you heard? Many HBCUs are ramping up their efforts to gain R1 status. The Plug’s Mirtha Donastorg dug into the issue. The designation comes fro the Carnegie Classification of Institutions of Higher Education, and it translates into major dollars. Schools such as MIT, Johns Hopkins University and Harvard sit at the top of the hierarchy with R1 status. Only 3.7 percent of 4,000 U.S. colleges and universities achieve the classification. R2 schools rank next. Currently, 11 of the 133 universities designated as R2 are HBCUs.

But with no HBCU currently being an R1 university, there is an impact on the federal research funding, philanthropic donations and other funding they are eligible to receive. However, many HBCUs have been quietly making a concerted effort to gain, or in some cases, regain R1 status.

Another new effort that does have many folks talking is President Biden’s student-loan forgiveness plan. It is poised to have a particularly dramatic impact on students and parents from historically Black colleges and universities, though some borrowers say the debt relief falls short of the aid package Mr. Biden laid out on the campaign trail.

More than 70% of students who attend the nation’s roughly 100 HBCUs qualify for federal Pell grants. They will each be eligible for up to $20,000 in debt cancellation, rather than the $10,000 cap for those who didn’t get Pell grants under the Biden administration’s plan. Borrowers with Parent Plus loans will also be able to erase up to $10,000 of that debt.

"Our brothers and sisters behind the wall are coming home." says Laura Ferguson Mimms, executive director of the Tennessee Higher Education In Prison Initiative (THEI). "And over the course of three years, 47% will return to incarceration if we continue to do exactly what we've done."

On another note, institutions such as Benedict College continue to break new ground by offering new Esports degree.

“It is a billion-dollar industry, it’s growing every year, and there are more opportunities, especially for African Americans and people of color in esports,” said Dr. Paula Shelby, head of the school’s HPER department. “We have competitions at Benedict College, as well as out in the community, and then we always get invitations to compete at a national level.”

Students interested in the major are set to learn skills in problem-solving, critical thinking, cybersecurity, and more.

Meanwhile, the U.S. Department of Education announced plans to support students of varied majors at HBCUs with the availability of $5 million in funds to support a new College Completion Fund for Postsecondary Student Success. The funding will support grants to HBCUs, Tribal Colleges and Universities, and Minority-Serving Institutions such as Hispanic-Serving Institutions – many of which are community colleges – to invest in data-driven and evidence-based reforms that encourage postsecondary retention, transfer, and completion.

“Reimagining higher education means rejecting a status quo in which so many students earn some college credits but no degree, leaving them with student debt they cannot afford and less access to good-paying jobs,”  U.S. Secretary of Education Miguel Cardona said.

Institutions are encouraged to focus on supporting students who are close to graduation and reengaging students who withdrew from school temporarily during the pandemic.

Fisk University held its first gymnastic practice in 156 years and the internet was here for it.

Fisk made history earlier this year when it announced its "Intercollegiate Women's Artistic Gymnastics Team," making it the first program of its kind among HBCUs and Tennessee-based institutions.

“Woman’s gymnastics exemplifies the values of Fisk University: determination, excellence, and a commitment to a more just and equitable future,” a university statement read.

A viral TikTok video shows the gymnastic team of HBCU students practicing their runs, backflips, front flips and stretches. The video accumulated more than 115.9K likes and almost 400K views in one night.

From sticking the perfect landing to sticking the perfect job, the National Football League (NFL) brings together HBCU & professional football stakeholders in its third annual NFL x HBCU Open House. Since the partnership was created between the league and the HBCU conferences in 2016, more than 3,000 HBCU students have participated in programs supported by the Football Operations department.

“Our annual HBCU Open House is critical to the cultivation of diverse talent at every level of the League,” NFL Senior Vice President of Football Operations Policy, Education and Relationship Management Arthur McAfee said.

The program also aims to increase and diversify the pipeline of students interested in pursuing careers in sports medicine and, over time, help to diversify NFL club medical staff.

Move-in day was emotional for students at Paul Quinn College in Dallas. A nonprofit that supports young people as they transition into college furnished dorm rooms of 13 students to help minimize money worries so they can focus on school. The organizaion also offered basic essentials to the young scholars. The surprise left many students in tears.

And WUSA9 shares the story of a new line of dolls that shines a light on Historically Black Colleges and Universities. The dolls feature characters from a cheer captain to a student body president and a homecoming queen. Each doll also has a major and interest including Pre-Med, physics, or captain of the debate team. Brooke Hart Jones, an alum of Hampton University, founded the HBCyoU dolls with the goal to share "the magic of HBCUs with children far and wide."